Last February 28th a unit of Scientific Commission released 1 Kg of fluorescein at the base of the pit “Pendolo” inside Corchia system. The following video shows the exact moment when the tracer dye is released into water.

At the moment the data collected from passive detectors and fluorimeter are being processed and very soon we’ll have the chance to get answers about Apuan’s karst hydrology.
Follow the FST channels on  Twitter and Facebook for updates.

In the night between Saturday 11 and Sunday 12 of this month (July 2020), a join team of Speleoclub Garfagnana and Gruppo Speleologico Fiorentino connected Chimera cave to the Saragato-Aria Ghiaccia-Gigi Squisio-Mani pulite cave system. The connection happened in a branch of the Saragato cave.

Initially, the existence of a connection was not foreseen, because the only known base-level springs of the two caves were different: Equi Terme for Saragato cave and the Forno resurgence (Frigido spring) for Chimera cave.
Later, a water tracing was made on the bottom of the south-east branch of Saragato cave, finding the same resurgence of Chimera cave. The tracing proved that Saragato cave presents an internal watershed, allowing the hypothesis of the connection between the two caves.
Further explorations bridged the gap between the cave passages, eventually reaching the long-awaited connection. Chimera cave adds 14.5 km to the system, that reaches a length of almost 63 km, and a total depth of 1200 m.
We would like to thank whoever helped and dreamed with us for this result.
The photo shows the massive chamber of the connection. 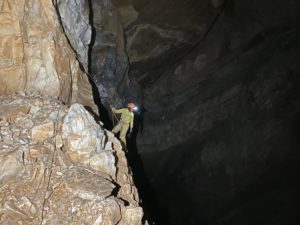 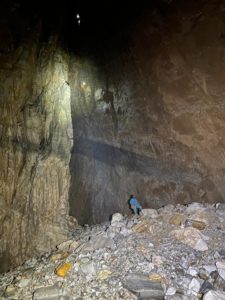 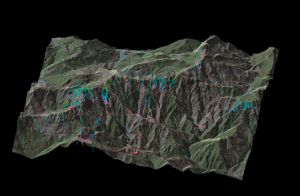